Autumn brings out the best in the Trossachs !
By Nick Mitchell Scotsman Newspaper 21st October 2010

The Trossachs has a sleepy charm of its own that is best discovered in the autumn months. 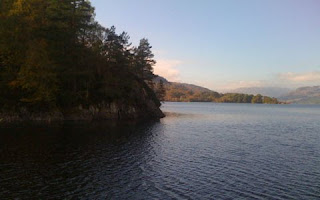 • Sailing out on Loch Katrine

A visit to the secluded forests and calm lochs at this time of year will be rewarded with an endless array of reds and oranges as the trees stage their annual, fleeting burst of colour.

A good place to start is by taking a boat trip on Loch Katrine. Until the end of October they have daily sailings for tourists and day-trippers departing from the the eastern edge of the waters.

The small jetty and visitor centre is just a short drive from Callendar, which is itself easily accessible from Glasgow and the central belt, making it an ideal destination if you want to spend an afternoon away from the urban hubbub. 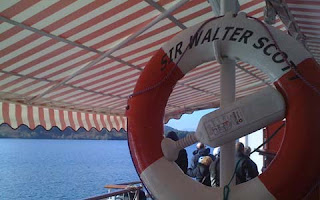 • On board the evocative Sir Walter Scott steamship

We made it just in time for the 1.30pm cruise on the Steamship Sir Walter Scott, which took us about halfway out and back in just under an hour.

The steamship itself is an item of historical note. It has been sailing these waters since 1898, when it was transported piece by piece from Dumbarton, and is now believed to be the UK's first green passenger vessel after it was recently refurbished to run on biofuel. 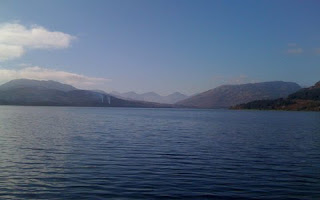 The famous 19th century writer from which the vessel takes its name centred his 1810 narrative poem The Lady of the Lake around Loch Katrine, which he describes in a memorable line as "one burnished sheet of living gold".

It's not hard to see why this peaceful stretch of water inspired Scott as you sail past deserted, rocky little islets and ancient forests mirrored at the water's edge. 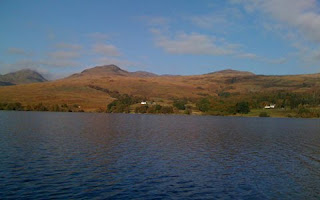 • White farm houses nestle on the northern shores of the loch

Scottish folk hero Rob Roy MacGregor is said to have been born in a 17th century stone cottage at Glengyle at the head of Katrine, and we were told by one of the guides during our cruise that the idyllic farm houses on the banks of the loch were once used as hide-outs during the Jacobite uprising.

But beneath the romantic allure of Loch Katrine is a vital function. The loch supplies the bulk of Glasgow's drinking water and several islands were submerged when the water level was artificially raised six feet for the purpose. 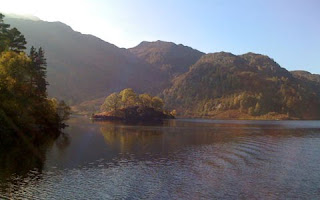 • The late afternoon sun shimmers on the loch

Having left Loch Katrine by three o'clock, there's still plenty of time to take in the surrounding area with a drive around the Queen Elizabeth Forest Park. This area of protected woodland and moorland runs from the east shore of Loch Lomond to the rugged terrain of Strathyre and is a worthwhile detour from the main road.

The roadside views of golden forests reflected in glassy lochs is a sight to behold, and more than a little reminiscent of similar picture postcard scenes in the Canadian Rockies. 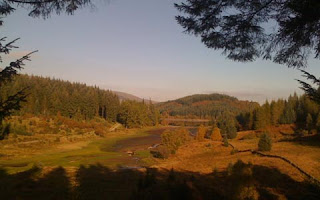 From here on we continued up and over the Duke's Pass, past the David Marshall Lodge and down into Aberfoyle, where you can grab a bite to eat and set off for a much less scenic drive home.
.....End of article.....

Why not come and stay at Lochside House 10 yards from Loch Katrine in the Loch Lomond and Trossachs Park.
http://www.lomondandtrossachs.com/ 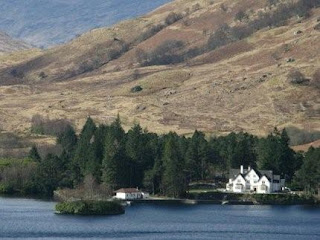 Posted by Loch Lomond and Trossachs Cottages Blog at 23:11